The 6 Factors that Influence a Phone’s Battery Life

Lithium ion battery capacities have been evolving at a steady rate in the past few years. This is driven mainly by electric cars, but also mobile phones have their share of the lithium ion market.

However, lithium resources are scarce compared to the global ambitions of Tesla, Apple or Samsung. Efforts to recycle have to be backed by efforts to preserve battery lifespan, without impacting the overall user experience.

This series of posts will talk about the different aspects that conscious phone owners have to take into account to extend their phone’s battery life, usability and recyclability.

We’ll be talking about lithium ion batteries, just because these are the norm nowadays and their environmental toll is high, which makes protecting them worth talking about.

The real life of batteries

Although in theory they should be lasting forever, in real life scenarios batteries are exposed to factors like:

Most lithium ion battery manufacturers recommend from 300 to 500 charge/discharge cycles for their products. That is the conservative approach, which means they shouldn’t lose much capacity over that range.

Not all cycles are created equal.

They depend on the depth of discharge, time of charge and temperature. Lithium Ion units are very sensitive to the depth of discharge. The lower you go, the worse it gets for the battery. Some papers refer to cycles as a continuous charging process from zero to 100%. Others add mini-cycles (like from 30% to 50%) to this equation, but they’re not equal in terms of battery degradation.

The battery health is reflected by its capacity to store energy, measured in mAh (milliamp-hours).

Voltage doesn’t quite matter in this, as it is not linear. For example, a phone’s lithium ion battery starts from 3.2v (empty) and goes to 4.35v (full). But in between there are a lot of charging states that don’t correlate to the voltage directly.

On this matter, there’s no other authority online that has published more experiment results than battery expert Cadex, through their site batteryuniversity.com

They have published a graph that shows the degradation of a regular 1500 mAh lithium ion cell.

As you can see on the chart above, capacity heavily relies on the number of cycles. But these were full 0-100% cycles. The same scenario wouldn’t have happened if the cycles had been smaller.

In fact, not only those partial cycles would have helped, but the battery would have had much more combined activity than if it were cycled all the way through!

As you can see, at a shallow 10% DoD (depth of discharge) the number of cycles of a LiPO4 battery was dramatically increased. A living example are the batteries of 2nd-gen Toyota Prius, that still live on after 15 years. They’re being used regularly only in the interval of 50 to 75%.

But, you don’t have to do this to a phone. Phones are supposed to have a much shorter lifespan, but the user still has to enjoy its experience for as long as he wishes.

Practically, if you only charge a phone to 90% and then unplug, its lifespan will be increased to more than 5000 cycles before it shows any signs of degradation.

Chargie is a very useful tool to achieve that. Beyond first-hand usage, your old phone may get new life in someone else’s pocket, after you decide it’s time to upgrade it. A phone’s technology is usually good enough for 3-4 years, but a Chargie will protect all of your future phones, and much more.

The Link Between COVID-19 and Phone Batteries 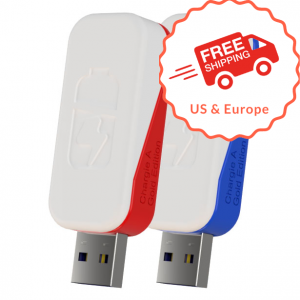